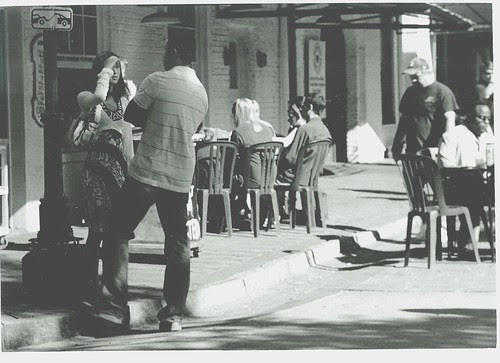 Before we can understand the interesting jazz of Savannah’s streets, we need to first master a few necessary chords. We need to first discern her vamps and primary riffs. We will then be able to see how she breaks from them and how she improvises her music.


The highest road division category in Savannah is the division between what I call the grid “loading streets” and the grid “avenues”. Loading streets are streets that are oriented along the dominant “loading” grain of a street fabric. Uses tend to be “loaded” consistently onto the loading streets—that is, most of the lots in a grid tend to front loading streets consistently across the grid. Loading streets are thus your “street address” streets. Main Streets are typically loading streets. Wide boulevards, such as Allan Jacob’s boulevards, tend to be loading streets. Loading streets also include the service alleys that access the rear of the lots. What I call grid “avenues”, in contrast, are streets that travel perpendicularly or diagonally against the dominant loading grain of a grid fabric. When oriented perpendicularly to the loading streets, avenues are typically traveling along the short sides of the majority of the blocks. They also slice diagonally across the grid at times, especially in cities designed in the Grand Manner. The streets diagonally oriented against the grid, as in L’Enfant’s DC and Haussmann’s Paris, are “avenues”, even though they, of course, function much like loading street boulevards and likewise invite frontage along them (but, this is the important distinction, they do so in disruption to the adjacent loading grain). Many arterial avenues tend to attract building frontage onto them even though they may travel against the dominant loading grain of the adjacent fabric. (Note: Savannah does not literally name its grid avenues “avenues” – I’m using the term “avenue” as a functional category of grid street that I have chosen, as I’ll discuss later, because of historical associations with the character of “avenues” and because of important precedents of this particular street type in America).

Note that above I am using the term “loading street” and “avenue” to signify the role of the street in relationship to the greater grid fabric. Just because a street segment has uses fronting it does not necessarily distinguish that segment as a “loading street”. What matters more in this “odonomic” classification system is how streets relate to the greater grid. For now, I’m not dead set on these terms, “loading street” and “avenue”, I just can’t think of a better way to name these important grid street classes at the moment (suggestions welcome!). I don’t know if there is a form theory of city grids somewhere that has a name for these two street characters already, but I wouldn’t know, since planners never seem to be even aware of this important distinction between grid streets. It seems they usually are happy resorting to talk instead of functional classifications of roads that apply, really, to branching, suburban, non-grid contexts, and they coerce that terminology to fit urban/urbanized street networks. This kind of talk, in fact, is precisely my biggest hang-up with the new ITE manual Designing Walkable Urban Thoroughfares. (Overall, DWUT represents a positive step forward for walkable thoroughfare streetscape design in America, but ironically to me, this manual, which was first unveiled back in March at the ITE 2010 Technical Conference in Savannah, could use a careful look at Savannah itself to understand how its so-called “contextual” approach might be hampered by its papa bear, mama bear, baby bear urban thoroughfare classification approach; …I’ll get to that later.)

What creates the distinction between loading streets and avenues is the fact that most parcels want to front the same streets. Human-beings, being commercial and civic creatures, like to concentrate access to lots on the same public streets. This tendency creates well ordered street fabrics and also churns out higher real estate values. Why? The value of the frontage is a result of the fact that the middle parcels of most blocks can only be accessed from a chosen side of their block. Thus, block subdividers typically favor the loading grain of the most important adjacent street. This puts the access to at least half of the lots in their blocks at the important frontage side, where they are most likely to capture more eyes and potential customers/users. Another way to look at the value of favoring the nearby loading grain is to realize that when adjacent uses have access points on the same street, the travel time of users traveling between them decreases. A greater diversity of destinations of nearby uses within closer distance to each other reinforces the overall value of their street’s frontage. We may not be cognizant of the hidden economic and very rational reciprocating choices behind our drive to create and perpetuate loading grains in the grid fabric (although individuals obviously intuit it), but we create cities this way because of our social intelligence. A lot about city form is realizing that much of productive human activity is a collective phenomenon that may escape the notice of most of its individual agents. Such beautiful creatures we are.

Loading streets tend to travel along the long dimensions of the blocks. It makes sense that blocks want to be long in the loading grain direction as that loading frontage is value and avenues have less direct access to uses. Thus, minimizing the avenue side dimension of blocks makes sense for land use efficiency and infrastructure investment purposes. But I think the block short dimension also represents an advantage in itself. Avenues increase the overall value of the grid network. Their shorter segments mean they intersect more often with loading streets and thus produce the global economic advantage of the grid gained from connectivity. Sometimes, they also use this connectivity value to increase value to themselves. They actually create higher pedestrian activity and related real estate value on their abutting parcels especially when certain geographic and geometric conditions are in play. Both Bull Street in Savannah and Manhattan’s Fifth Avenue are avenues that powerfully attract activity and offer real estate advantages for similar—but also different—reasons that are instructive to me.

Yes, by the way, even city grids composed of perfect squares have dominant loading grains. They always do. In such places, as in downtown Portland, the greater geography and geographic features, such as grade change and water frontage, and important internal features, such as linear parks, help create the dominant direction of the loading grain in subareas (although, the direction of that grain is prone to change, subarea to subarea, more often in these open fabrics).

Because every use in the suburb needs to cater to vehicular access, any of the street patterns that create the suburb stem from underlying, locally-focused, proforma-driven imperatives to maximize the loading condition. An avenue type of street is just a waste of infrastructure for subdivision designers. A cul-de-sac, not coincidentally, is a loading street by default, and, in fact, it is the utter maximum condition for the loading of uses unto a street, an accommodation to the fact that cul-de-sac residents do not have an economic advantage to maximize access to their homes (making internal avenues unnecessary); in fact, the economic advantage goes the other way. Even though some collector streets in a subdivision have to be avenues (or avenue/loading street hybrids), the residential suburb detests the avenue.

In part because of that suburb many of us have grown up in, loading streets are what most people have in mind when they think of a street, so much so that we may miss the network utility of the humble avenue, if indeed we are even aware of it as a distinct type. I certainly did not think about the urban avenue much before I got really acquainted with Savannah’s historic grid. New Urbanists are no exception to this tendency either. Judging from their default donut block plans and default street typicals, New Urbanists love maximizing the loading condition as well.

The avenue is the most urban of streets. In my next post, we will get more acquainted with this stranger who quietly serves us. This humble, utilitarian street type has many strengths. It is a street type that tends to be neglected by planners. It is not often as stately as the Main Street or the Boulevard. It is not as intimate or human scaled as the rear-yard alley. But the Avenue is the workhorse street of the grid. It provides the cross-bracing and the hanging threads of the structure. As you can probably tell by now, I like it a lot.
Posted by Eric Orozco at 6:37 PM