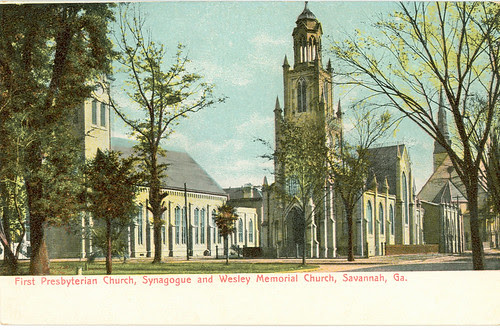 
Not a Single One To Dominate Above Them ALL: The old postcard image above is one of the best representations of Savannah's pluralistic love for civic institutions I know. The Synagogue in the foreground to the right is the Temple Mickve Israel facing Monterey Square. It was founded by the descendants of the first Jewish settlers of Savannah, who arrived in Savannah's founding year of 1733 after fleeing religious persecution in Portugal. They established the third oldest Jewish congregation in America. Doubtlessly, the principled laissez-faire approach formulated by Savannah's trustees in devising Savannah's pluralistic trust lot strategy can trace its moral and theoretical underpinnings to 17th century British liberalism inspired in part by John Locke. John Calvin's pragmatic hands-off approach to religious sectarianism might also have had a contribution here.

An Odonomy of Savannah IV: Origins

Savannah's fabricke, I suspect, was the conceit of colonial experimentalists and humanitarians, young scientists of city form on the march, who, without a doubt, eclectically mined an array of ancient sources and contemporary precedents, but who, nevertheless, aimed to consciously evoke something that was yet to be formed to history. In this latter respect, I think the legacy of Christopher Wren must have been foundational to them, if indirectly so. I do not claim of course that Sir Christopher Wren, Britain's "Leonardo daVinci", must have invented a Form that Savannah derived from; no, merely, I believe that he was one of those seminal minds that laid the groundwork to propagate an approach to thinking about cities in experimental and unresolved - yet systematic - ways. These ways would prove useful to inventing conceptions of city form that are fundamentally "open", able to travel, profuse in options, and able to copiously adjust despite their obsequious dependency on burdened geometry. (Some would go so far as to call these patterned plans "fanciful", “rigid”, “artificial” and "abstract", as if of our other contemporary conceptions of city form, including supposedly "organically" derived plans, somehow evaded these terms). Richard Sennett's The Craftsman owns a gem of a discussion on how Wren's strange impositions of "clarity" tended to wonderfully leave his works paradoxically more open and tolerant of ambiguity and irresolution. (Indeed, this is a mystifying quality exhibited in Savannah's repetitive fabric that has delighted more urban design thinkers than myself.)

But Savannah's colonial settlement also is an approach to city-making that could only result as a consequence of a synthetic, rationalized approach to sympathetically address human needs and shortcomings. That is an Enlightenment approach, we note, particularly an approach of the British Enlightenment. As such, probably no need laid the cornerstone for Savannah's conceit than the socially patronizing need to rationally reconstruct the heart of London after the Great Fire of 1666, as is quietly evinced in Wren's proposal for the reconstruction, which Sennett so incisively treats in The Craftsman. Because of Sennett, I now refer to Savannah’s Form as "London's Spring". Savannah is London rising from the ashes at the behest of the British Enlightenment and then latent Protestant social activism. O a humanitarian's delight it is!

As I touched on my last post, Savannah's form sprung from the need to create a particular kind of planned settlement, the equal lot subdivision. An equal land apportionment system was devised to create reciprocal economic stakes and to facilitate communal cooperation, particularly in the vital matter of the colony's defense. In creating equal lots for settlement, Savannah was an early and peculiarly prophetic manifestation for the dominant form of America's settlement pattern, the suburban lot subdivision--even though Savannah cannot claim to be the progenitor of any such thing. 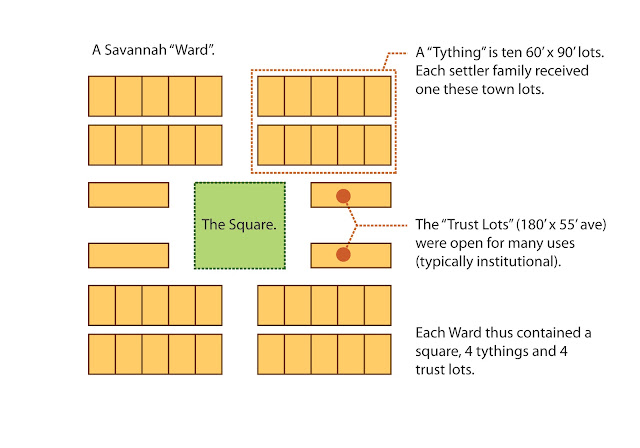 Savannah's town grid is functionally similar to the endlessly propagating suburban lot subdivision in some important ways (mentioned in my previous post). This is an accidental fact of history of course. But unlike most of the contemporary developers of the latter, Savannah's founders did not seek any personal ROI. Savannah's trustees, including Oglethorpe, were the kind of wealthy people who were into advancing the second chances of debtors. Their altruistic conceit not surprisingly resulted in an early manifestation of utopian city and regional planning. Indeed, their motto for the Georgian colonial prospectus (which is to this day on the seal of the state of Georgia) was taken from Augustine’s Confessions: NON SIBI SED ALIIS, "Not for Us, But for Others", which Augustine offered as the stance of principled humility that permeates Christian intellect. Literally, as far as the trustees were concerned, Savannah was “not a place for us”. A divested utopia. We would not be exaggerating to claim that Savannah is veritably America's first planned "habitat for humanity". The city was founded to give down-and-out British folks a second chance at life and prosperity.

Savannah was also, from its inception, purposely designed to be a haven for Protestant sects persecuted for various reasons. Huguenots, Portuguese Jews (Oglethorpe unilaterally expanded the sectarian envelope to include Jews), Moravians, Salzburgers, and Gaelic speaking Scots were represented among its earliest inhabitants. Partly for that reason, Savannah was designed to be incrementally augmented, ten families to one trust lot (in proportional but not necessarily actual terms). There was no one “central square” in Oglethorpe’s Savannah, no central axis, no landmark devised to dominate, no imperial terminated vista, no wayfinding schema. Not a single thought or provision of prominence for any single civic/religious or governmental edifice was implied in Savannah’s founded form. The concern for establishing a civil society with fundamental parity at all social scales is shown by the respect of the ward-grid plan for individual property and its conscious—indeed utopian and obsessive—concern for creating a plurality of civic institutions. This is physically represented by the reserved Trust Lots of the squares, of course, arranged with such cardinal parity that, just as the individual town lots represented the currency of reciprocally honored contracts created between free and equal men, the squares exist to facilitate the contracting between the semi-autonomous societies needed to formulate the consent of the governed. This contracting civil society, as the colonial experimenters would certainly be well-conversant about by the early eighteenth century, is what post-Hobbesian British reformers suspected upheld government and created healthy republics.

Savannah’s ward plan manifests, with imposed, Christopher Wren-like geometric clarity, the liberal, early modern (17th century) response, which was best represented by John Locke, to Hobbes’ more pessimistic prefiguration of the “social contract” in man’s nasty, brutish and short-lived “state of nature”. Savannah celebrates the pre-monarchic social contract. While I cannot claim that the writings of John Locke were the theoretical underpinnings of the Savannah plan, this systematized egalitarian utopia has the scent of Locke through and through (as well as the scent of John Calvin too – not to simply nod at the interesting contrastive referents provided by a popular comic strip). Savannah’s plan suggests a return to the “natural state” of man, a more open and ambiguous, pluralistic and irresolute state, where “equal” men establish contracts for government, and where free people condescend as a matter of civic piety to protect one another’s property, security and moral freedom.

Aside from English Common Law, no capricious hierarch or legal artifice would be allowed to circumscribe the colonists’ rights in immediate terms. In fact, the trustees (most of whom where members of Parliament) were so concerned with the threats that bureaucratic bugbears or legal disputes might impose on the colony’s developmental stages that they – I kid you not! – banned lawyers from entering the colony. The trustees hoped to create a plural and open civil society, free of even the burdens that their own wealth and attendance might impose upon it. (Although, of course, while Oglethorpe was present there in the first few years of the colony, he did not hesitate to impose it by signifying his commands with “You may think about....” and “Perhaps you are right, but...”. Every utopia, as Corbu found out, still needs a benevolent despot to found it.)

Probably no historical artifact tells me more about the Origin of "Lockian Savannah" than, in fact, the earliest image we have of the city. During Oglethorpe's entire on and off ten year stay in Savannah he had refused to take or erect a permanent domicile, electing to stay in a tent next to a few Southern pines that had been left standing for scant shade near the bluff's edge on Bay Street. A romantic to the end, Oglethorpe had never budged from the spirit of the prospectus motto. His court was a tent opening like that of the itinerant judges of the Old Testament. The image depicts a small battery off to his left to face the Spanish threat. In front of him, the first four wards are being infilled by identical houses in America's first equal lot subdivision. On the river below, passes the tranquil commerce of ships and native canoes. All around extending to the horizon is the flat wilderness ready for clearing and cultivation. A fertile land non sibi sed aliis.