The recent CNU ballyhoo over the attack of the "vertical cul-de-sacs", has got me thinking about my love affair with tall buildings. My most recent crush is Charlotte's most recent addition to the skyline, the Duke Energy Center (DEC). Locals call it the "Voltron Building" because its outlines can glow every color on the spectrum throughout the evening (anticipate that it will be given frequent media play during the upcoming DNC Convention).  These colors can represent causes, home games for our local teams, community events, and so on. On special occasions, the building grants variable light shows.  Voltron even has its own twitter handle, @WellsLightsCLT, which daily tweets the color topic of the night.  An email address exists where one can send requests for an evening's color treatment in order to represent  your local cause or event.

You can sort of think of DEC as a civic "weather-vane".  Though I hardly ever go watch the woeful Bobcats play in the Arena, I do kind of like the fact that I know a home game is in progress by spotting the tell-tale blue and orange pride colors on the skyline.  Not only is DEC an indefatigable civic booster, it's Charlotte's chirpiest (and brightest) fan.

But the thing is...I already loved DEC even when it was just a pile of green slab and cement core methodically inching up the skyline.  Luck had it that at the time I was subletting in a townhome in the South End that had a direct view to the construction site.  Every pleasant evening I would go out to my balcony to take account of the progress.  Eventually, when I had an hour to spare, I started sketching the progress of the skyline, attempting to sharpen my skyscraper drawing skills. Because I'm one of those sketchers without the patience to draw straight lines, this took an act of excruciating mental concentration and page-orienting calisthenics.  But I stiffed it out for the sake of the record. My first result: 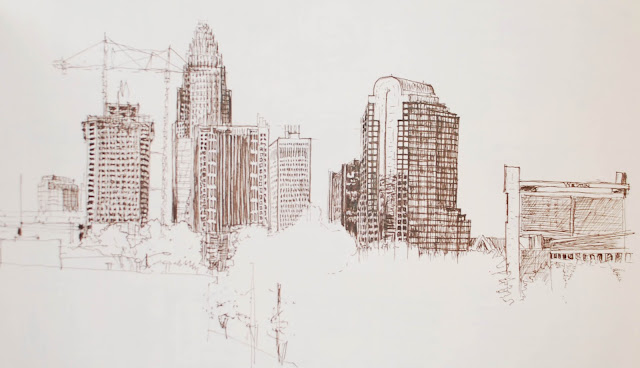 The DEC is on the very left.  Unfortunately, I didn't date the above sketch, but I estimate it was executed sometime in the Spring of '08, based on the adjacent material in my sketchbook.  The next sketch, however, is from the 9th of September of '08. Notice that as the DEC got taller, the other buildings seem to have self-consciously grown as well: 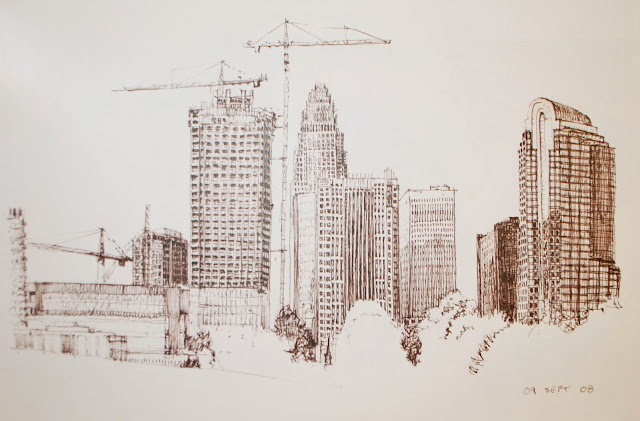 ...I love the aloof attitudes of the resting cranes...their enormous beak-like arms slung out there hundreds of feet in the air so casually.  They survey Charlotte with an air of unimpressed self-possession, like cowbirds perched on water buffalo.

The next sketch, executed not long after, took full appraisal of a new situation.  This time, it was the appearance of the next row of townhomes in my development, which would partially block my view to the DEC construction permanently (you can sort of see it partially behind the townhouse). 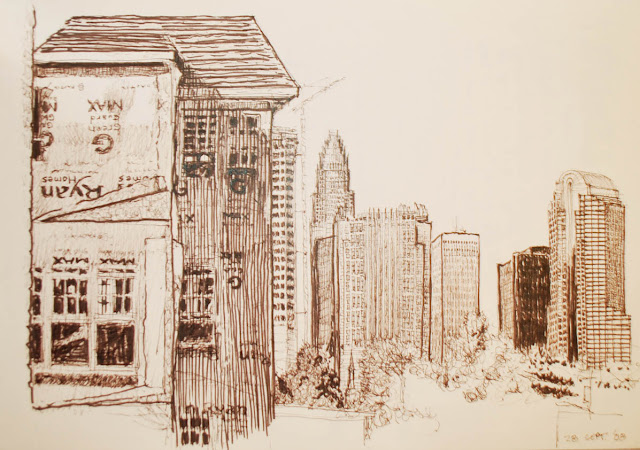 Since the DEC's construction completion, strangely enough, I haven't felt the lighthearted need to go out and sketch the results, although I've taken many photos of it, like the one at the top.  Perhaps I'm such an architect type that I find the act construction itself the main event.

I think the reason for my fascination with buildings undergoing construction is simply that I'm cognizant of the fact that I'm a kind of construction archivist, recording a passing event that will forever remain unrepeated. For some reason, that needs to be rescued in documentary amber.  Notice that my archivist's compulsion went to the extent of recording the state of the sheathing and curling house wrap on the sprightly townhome... I can't keep myself from doing that.  I want to state: This is where the construction stood at this time. This is when this building was green. It existed this way. You may not believe it, but the cranes used to hover over it like fussy attendants, coaxing it along impatiently.  "There is so much to do here," they said.  "So much to go over while we peck and preen"...

"A building being built is not yet in servitude. It is so anxious to be that no grass can grow under its feet, so high is the spirit of wanting to be. When it is in service and finished, the building wants to say, 'look, I want to tell you about the way I was made.' Nobody listens. Everybody is busy going from room to room"...

But enough of that. More than anything, I'm just fascinated by my changing city. I know that I'm seeing first-hand a small speck of what Spiro Kostof called the generative order of the "urban process", which tends to transcend the city's formal origins in such ways that even the careful historian cannot help but to marvel at these sometimes.  This is why I remain unimpressed by spontaneously generative ("emergent") theories of urban design when wedded to formal theories of order.  Such theories must thoroughly supplant the super-ego of the designer with a cosmology. Which is what Christopher Alexander's system is: a cosmology.  It is hard to say whether this is an improvement, however elegant a fractal appears. His is a hybrid of the "cosmic model" of urban design being brought to the normative organic model.  But the only truly "emergent" (spontaneously organic) model of city form may actually be the speculative grid, if anything.

Regardless, Spiro Kostof's gentle reminder is always my forceful recourse of reflection: "...a city, however perfect its initial shape, is never complete, never at rest".  That is good news. Representing that in sketch form, perhaps, is my delight in drawing.