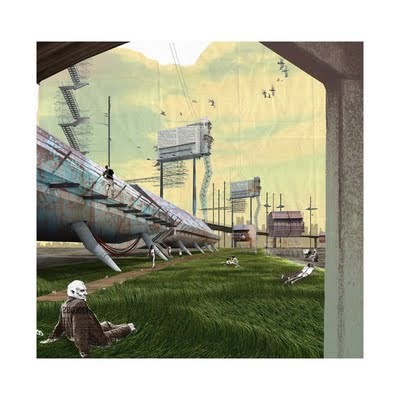 "The Garden of Machines (Dwell)" by Nathan Freise, from Unseen Realities

Strange what grips my imagination sometimes. Since I've seen the Nathan Freise prints over at BLDGBLOG (via Landscape Urbanism), I've just not been able to get them out of my head. I keep returning to look at them. Admittedly, they remind me of the situationist surrealism we used to conjure up in our dreamy photoshop years in grad school, but they keep reminding me of the pastoral possibilities presented by the leftover spaces of urban infrastructure. There are a lot of places of pastoral idyll in the city that we don't take advantage of. I've contemplated how to appreciate and use these underutilized spaces before. Architects tend to think we need to populate these non-places with aid of landscaping and programs that make sense. But what if the program is just creating a place to lie in the savannah grass? Meanwhile, a lot of our uber-programmed, ultra-terraformed and mowed parks and recreation areas remain eerily empty.

The West Bay Street canal and shipping yard overpass in Savannah needs a kind of Freise Brother Pastoral treatment. Pastoral Liminal Crossways.... The light in the imagine department is blinking, folks...
Posted by Eric Orozco at 10:52 AM No comments:

Labels: wherein I indulged in some LU fetishizing before knowing it was a movement 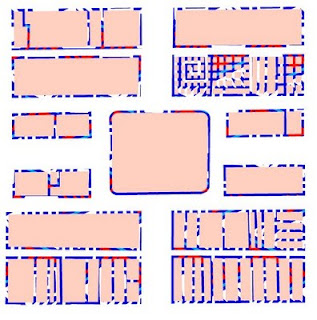 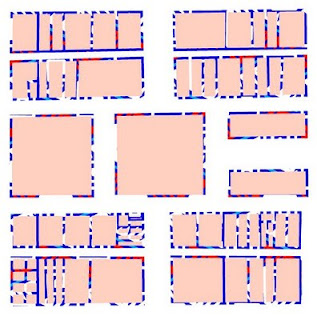 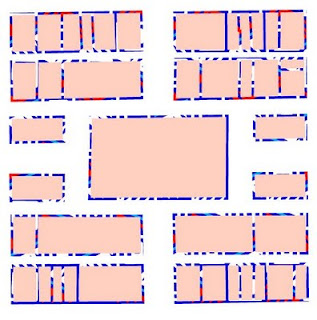 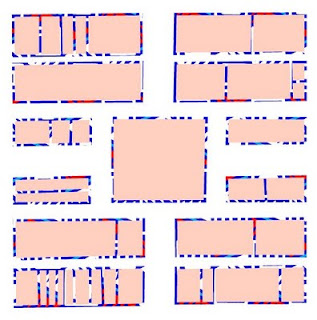 Today is August 17, 2009. Exactly 50 years ago Miles Davis and Bill Evans's Kind of Blue was released, which, not only introduced modal playing to jazz composing, but has remained the best selling jazz album of all time. In the spirit of Flamenco Sketches, I present here variations on a theme. This is the lively and sad moods of Savannah's historic district squares. Enjoy.

With much love and respect for Miles Davis, who, along with Savannah and Jane Jacobs, teaches me much about the art of planning without planning...improvisational urban design.
Posted by Eric Orozco at 1:37 AM No comments:

Odonomia and the Garden of Good and Evil

The impulse to classify, to seek a systematic way of communicating things - to describe the order of order - has a strong appeal to humans. Whether we do it consciously or not, perhaps there is no more striking and persistent quality to human intelligence and communication than this taxonomic inclination. As a student of religion and communities (aka philology) and then, later, a student of cities (aka urbanism), I have often been fascinated by the classification schemes and methods used to frame world-views. The way we name/order things has tremendous implications on the way we choose to use those things, in the way we create relationships and hierarchies between them and ourselves, and in the way we create new things and new concepts. When phenomena escape our attention, it is likely because we haven't the taxonomic agents to describe them.

"Taxonomy" itself combines the Greek words taxis, meaning order, and nomos, meaning law or method. It is the study of classification or order...or, somewhat redundantly, the "method of order", which the Greeks themselves would have probably called philosophy.

Contemporary zoning codes are a mish-mash between two asynchronous taxonomic impulses, both of which help humans frame laws governing the environment according to a certain philosophy of urban order. These philosophies spring from the impulse to classify Use and the impulse to classify Form. While tight relationships are always formed between Form and Use (implicitly or not), it is easy to see that Euclidean codes choose to frame categories by Use. They categorize by Use and create rules for their Form. The fixation of "form-based" codes, on the other hand, is the physical form of the environment itself, where the urban transect, a monistic conception of the complex organism that is the city, is conceptualized first, bypassing the need to categorize by Use. It categorizes by Form and then applies rules implicitly for Use, making sure that lamppost C is appropriate for supposed District T-2 uses, even though the city is not known or existent in any place but a Platonic heaven. In many ways, the noumenal Transect has superceded the City...a whole bevy of human operated functions previously unregulated suddenly becomes beholden to abstract (and unattainable) codes of Form.

However, the fact is, both classes of codes do legislate both Form and Use, and they are not only driven by a common approach to nomenclature, conceptually and legally they are driven by the same desire to delimit property rights, mediating between the rights of the owner and the rights of the surrounding community. Form-based codes (to me anyway) seem to heighten, not remove, the Euclidean taxonomic burdens imposed on design. These burdens may perhaps order the environment, but it is not always clear that they help move communities to optimal economies and/or happier/healthier societies. They represent a kind of legal artifice that the actual urban environment and its functions often have to evade to function well (if not altogether misbehave from). All economies often operate by tacit and legally invisible (sometimes illegal) rules to survive and flourish. We even give the name "illegal" to people who help the city function thus. The designer, as a consequence, is always mediating between legally describable/governable needs and often illicit or ungovernable aesthetic, social and economic needs. Euclidean codes segment the city into broad categories and thus are more fluid and economic means of governing city form, and thus tolerate certain conditions of the city needed for its social and economic good. Form-based codes, on the other hand, legislate aesthetic concerns on behalf of an ideal city, which may be far from what that actual governed city has the means to become.

Is there perhaps a third taxonomy of "good" and "evil" that can help govern the city? What could it be? Well...let me posit that the problem of governing city form is that our taxonomy of urban form is not excogitated enough yet. Maybe what we need to better describe first is a true taxonomy of urban form, a method or philosophy of contextualized urban design - what Allan B. Jacobs has always pursued in his work, especially in his work to describe/categorize the various forms of the "great streets" and the beloved places of wonderful cities. But as the work of Kevin Lynch and Julian Beinart points out to us, the city is apt to evade every Platonic order that its designers (and I mean designers in the broad sense) try to impose upon it (by code or social power), ignoring the social, artistic and ungoverned needs of its various communities.

I see the start of a more excogitated taxonomy being explained to me when I contemplate the fabric of squares and "Tithings" in the Historic District in Savannah. The Historic District observes a wonderful order...An order with rules, and, yet, multifarious exceptions and modulations to these rules exist. It is a template that systematizes the order of the street/public realm (an order that is neither use nor transect derived - but street derived), with legal consequences, and yet is completely promiscuous in application, so that every square and street is indeed unique and in some way unlike its sisters and analogues in other places of the grid, in both form and function! It is as if the Platonic pattern from the mind of Oglethorpe (conceived for reasons very different than Savannah's needs today) was dropped into a fecund soup and allowed to copulate with the wonderful imaginations of every square district. Savannah sheds light on certain rules of its city form that are not easily catalogued in other taxonomies. It is a vivid lesson...a gem of urban design theory. It teaches an Odonomy, a method of classifying the hierarchies and orders of the street. It has created a strange order of transportation-integrated land use forms, which, in some ways, represent departures and even inversions of "good" and "evil" with respect to late and contemporary manifestos. What is wonderful about Savannah is often what can't be transferred...It invites a respect to what can't be copied.

I will get around to describing more...This won't be easy. I'm still soaking lessons. ')
Posted by Eric Orozco at 12:29 PM No comments:

Union Square Market, originally uploaded by Kym Rohman.
Sorry for not posting lately...I've simply been underwater attempting to catch up with, yes, work, but also my rest and my activities in life. Blogging is something interesting to keep my mind focused and explorative, and it is a blessing that much in my life has kept me occupied in these departments. Plus, I have plenty of interesting things to do online...like read excellently reflected and thoughtful blog posts and I count my blessings in that department to know so many excellent bloggers. I am blessed to know you all. To be fair, I will try to share my experiences and realizations as I'm able.

Primarily, I've been working of late on two small plans for outdoor markets - one in one of my favorite of all cities (believe it or not!) Savannah. Savannah never ceases to teach me, and I can't believe I actually get to work on a project here. I can't share much yet, but believe me, we'll get to it. I am blessed to see what began this year as an exploration proded by a small pro bono project (which is about to get started) to wind its way more fully into my actual design work. I see that, indeed, the holy one above works all things for the good of his creatures.
On the other side of the coin, nothing about my work comes very easily...and nothing in life is straightforward (which is why I recognize more the importance of Sabbath). Design is hard, because people are ...well... all different one from the next and all relationships involving power need delicacy and respect. My naivete has been often exposed during these times. Designers, I've had to realize, do not live in a world to their own, and, well, ...I think that's a fortunate and good thing.
Posted by Eric Orozco at 10:18 PM No comments: