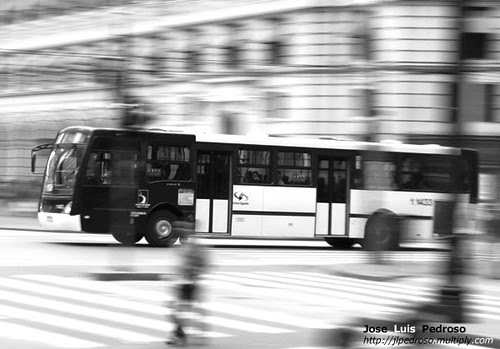 The benefits of high-end BRT systems - like Sao Paulo's Expresso Tiradentes above - argues Dario Hidalgo, are easily lost on a public acculturated to slow city bus systems. As a result they prove difficult to implement in countries such as ours, where BRT transit still lags years behind. Allan Hoffman and Alasdair Cain's suggest referring to full-fledged BRT systems as "Quickways" not only for more helpful political nomenclature. In fact, they suggest understanding a Quickway as a distinct mode in its own right, with its own special benefits that should allow it to move beyond the shadow of the Light Rail. Because it is planned as a fall back option, transit planners fail to realize and implement its network benefits.
Posted by Eric Orozco at 10:31 PM No comments:

If Herr Meier can do it...We can too!

Posted by Eric Orozco at 8:16 AM No comments:

A great example of messy urbanism

Posted at Seattle.PI
This story of a Seattle woman has much insights to teach about urbanism and life.

(a) Scale needs a reference point. Like the house, car, woman and lone tree in the photo above, every development, like a bride, needs the scale of something "old" to remind folks what was there, and most importantly, what now IS.
(b) It's nice when the enormity of a life can be made visible. One of the few cases that I can think of when the life uncovered makes a physical statement....What a happy accident! What would have happened had the developer not likewise been as stubborn? Would anyone have ever known about this woman? Is this not a foreshadowing of what the Last Accounting is all about?
(c) Making yourself the last holdout is sure to gain you more attention than you seek. :D
(d) Now I want to go out with that kind of style. No need for a will, or a ceremony...What exists is comment enough.

Thanks Steve for the hat tip.
Posted by Eric Orozco at 9:29 PM No comments:

What they were saying exactly three years ago.

"This bubble is no myth," wrote one California builder who said he had "been around for decades." "Real estate will go back to the Agricultural Age. Get ready for deflation."

"Warning signs are everywhere," said a New York mortgage banker. "Rates went through the floor, prices to the moon. I sold everything a year ago, paid off debt. The Great Depression will look like a cakewalk."

Funny, how prophetic they look now...and yet nowhere in the article was the scale of the meltdown truly foreseen. Some even thought the dollar would be stronger. They sensed the subprime lender troubles, but what did they completely miss? The picture with Oil.

The NYT today gives a sordid snapshot of the entire mess.

Posted by Eric Orozco at 4:31 PM No comments:

Once again, I'm prognosticating. I'm excited about advancements in web2.0 applications for planning as well as the power of the multi-sensory screen to aid design production. (Increasingly, urban design and architecture will converge to near indistinction). In the office, multi-sensory screens will dramatically improve production, and will probably lead to a sharpening of design process roles. Here are some of the transformations to our field that I anticipate:

1) Architecture as Performance: Designers will be more like performers and movie directors - more accurately: Charette-performing animators (more on this later). There is bound to be more segmentation and diversification of roles. There will thus be a greater need for specialized support staff and a centralization of different disciplines in bigger offices, but perhaps we'll see more freelancing digital modelers, who are hired to be performers, coaxing clients and interacting with the public, as much as designers.

2) Re-materialized Contextual Perspective: Harnessing the digitized Earth, we will be designing from the street again, not from plan, thinking first about the environment and surroundings - perspective consciousness - not by starting from the myopic program of a black-screen plan to produce plop architecture (the way AutoCAD now likes production).

3) Fast Realization: In scale of work, huge productions are going to be accomplished with little relative man-power, as laborious drafting (a point by point process) gives way to computer mediated sculpting (synchronous manipulation – like playing a guitar). A single digital sculptor will probably be able to sculpt animations such as this one for a Moscow development, in a matter of a few days, if not hours, mostly by pulling real life building models of her favorite buildings from around the Globe, which she would pull from Second Earth or reconstitute by "photosynthing" photos in Flickr (or she will simply walk to her nearest favorite building, walk around it taking photos, take the shots to Photosynth, and she'd have a ready-made 3-D model she could morph to her liking). At her work station - which, incidentally, will look amazingly like the traditional architectural draft-tables of yore (hello swivelly stools!) - the multi-sensory screen before her will read the movements of her hands like a finely tuned musical instrument and also take input cues from her voice and even her eye movements. Effectively it will be a kind of prosthetic augmentation of humans – yes, the ubiquitous tools of civilization will all dematerialize into a perfect one (play 2001 music here) as the human and machine mutually contact one another without interfaces (keyboards, mice and the like). The work-potential of this is even disturbing...We just aren't used to thinking at that scale…or critiquing at that scale (is that New Czarist, upscale-retail "new town" really good for humanity?). Coupled with this is the increased work potential of networks, which will still value face to face relationships (contrary to the opposite effect people think the web brings…I'll have to talk later why this is so, and why your paycheck will still be dependent on how good your meatspace teammates are and how much they really want to work with you).

4) Design Thought: There will be a shift in the conceptual armatures of design, which there always is in the wake of innovations (witness the recent fetish for blob architecture). Design thought will change, subtly and not so subtly, both in the process of adding new sets of skills to the profession (particularly tied to changing objects in the fourth dimension) as well as in reclaiming traditional skills that have fallen to the wayside due to the keyboard dependent phase of our existence (drawing/modeling).