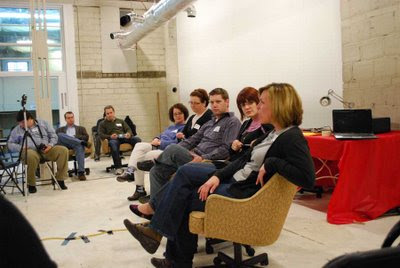 Local journalists at BarCampCLT discuss the shifting environment of journalism
I had the pleasure to attend BarCampCLT yesterday. It was not only the first real indication in my four year experience living in the Queen City that creative industries actually do exist in this starchy town, but that there even exists a ray of possibility that this city actually has some (laughable at the moment) traction to become a "Creative City". Granted, we are in a distinct disadvantage with respect to our academic and research-friendly neighbors up I-85, but that is not to say that we aren't in a good position to develop high-caliber innovation hubs especially in Web and Media related industries. Now that Merrill Lynch and S.F.-tuned Wells Fargo are in our orb, who knows what kind of long term advantages may develop in Charlotte. Can we *gasp* become the SE hub of venture capital? The Infotech hub, Social Web research hub, and financial software/webware development hub? Hmmmm.......... Depends on the nimbleness of our banks and the true caliber of their leadership, assuming they survive the winter, but who knows. Who knows. Who knows, people. If you tune the magnets well, I see lots of synergies you can work with.

I think two big physical resources are needed to develop the needed "creative infrastructure". First, we really do need many more "third spaces" in this town. We need, moreover, super-wired third spaces...a high-caliber, free wifi zone blanketing all of Uptown and the surrounding neighborhoods at the minimum. We also need the creative-friendly, bike-friendly, transit-friendly urban realm that supports these social spaces. Mobility, whether social or physical, is cheap and ready access to capital and resources.

Secondly, we need to make sure that we don't gentrify-out our inner-ring neighborhoods to take away cheap places to dwell in right in the shadow of the Uptown conglomerates and corporations. Since the market will no longer support conversion of old mills and warehouses into high-end lofts, we need to instead develop these spaces as cheap itenerant housing and informal office spaces for freelancers, coworkers and all sorts of other urban Bedouins. The partially completed condo and townhome developments that now sit in limbo due to sudden loss of financing (such as the "green" development infront of Area15)...well, convert them instead into rental live-work units that are more dormitory and office space than dwelling units. We need to attract the sort of dumpster-diving, technological riff-raff that dwells in Silicon Valley. They don't want condos. They want wired, caffeine-dispensing, (cheap office space) third spaces. The kind that also serve beer and wine, and favor minimilist utilitarian decor and tables over couches. You get my drift.

With respect to the social infrastructure, we need to host events like BarCampCLT more often and develop cultural resources, including cheap, unorthodox meeting venues to network, recruit, demo, libidinous-ly share information and resources, attract attention from industry insiders and venture capitalists, mix and match, support good causes and volunteer, date each other, etc, etc. It seemed to me that most of the people at BarCamp were freelancing consultants, who are project minded, not "career-focused" in the corporate sense (they instead try to leap-frog to better things). They are happiest traveling from project to project, and they till the soil in the midst of their own to attract complimentary talent and skill-sets to handle complex, rapidly-changing projects. (Creatives are not the kind who reserve themselves to climbing the greasy poles of corporate life. They understand that the primary goal of corporate management is to clip your wings. They are highly aware of the ineffeciecy of redundancies, in fact, because one of their greatest skill sets is to remove or circumvent them.)

We need, in short, to transform Charlotte into a New Century City.
Posted by Eric Orozco at 11:14 AM 1 comment: 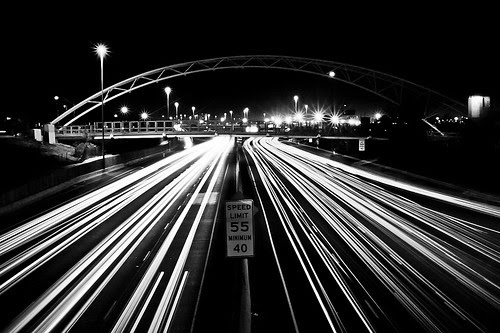 Karrie Jacobs is really on to something...Don't destroy it. Rather make it more. (This is the sort of thinking that will stave of the "second great depression".) Accept your Interstate resource. Take a deep breath,...and embrace it. Love its hidden potential. Ask what else it can do for you.

Do I hear High Speed Rail anyone? :)

Posted by Eric Orozco at 9:24 AM No comments:


Obama CNN The Moment Photosynth: The Inauguration from digitalurban on Vimeo.


...I say...I feel like the plumbing system was backed up for six years and today the toilet flushed beautifully for the first time...

I'm happy to move on.

Yesterday I was a sidewalk designer. Today I am a sidewalk dancer in a Jane Jacobs ballet. Happy planning my deari-os....
Posted by Eric Orozco at 9:07 AM No comments: