Dreams of the New Edge Mega-City 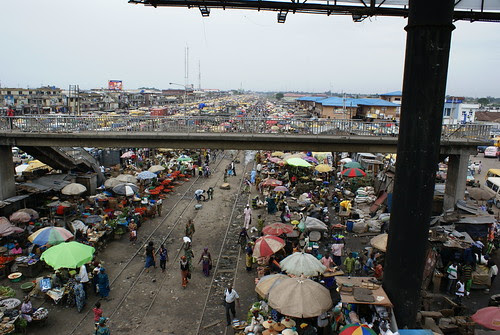 I am fascinated with dystopian cities. Some of my favorite city visions are depictions of infernal cities, such as Blade Runner’s LA (the anti-LA that always rains, and where no one really knows anybody). I think all exciting cities do contain a right admixture of paradise and inferno. Perhaps because the city of my birth, Mexico City, contains some of the best examples of each (and is still the most exciting urban environment I’ve experienced), I’ve always known that thriving cities are dwelling purgatorially in the precipice of heaven and hell. Cities are the ultimate dwellers of the breach. It is not an accident that apocalypses and cacotopoi feature cities prominently, as do dreams and nightmares.

The edge is what makes 21st Century Mega-Cities grow, and, boy, they are so riven with them. Yesterday's lead article in the New York Times featured the lawless growth of Gurgaon, New Delhi's Blade Runner version of an Edge City. Gurgaon has grown so rapidly and tremendously that almost no public infrastructure has been built to serve it. Yet, it has become a hyper-burb - one of those freaks of gigantism, who, seeded into soil so unimaginably fertile at the cross-streams of global capital, and so unregulated, has outpaced all attempts to plan it. It is a Shenzhen without the socialism. To understand what makes a Gurgaon is to realize that it is the Edge City that skipped places like Dublin, Ohio. It has "leap-frogged" the slumbering and conventional developed world, with its stultifying 30 year transportation and land use plans, and went straight to the source of wealth production. The place where the American Dream actually exists most desperately in our young century. It is the 21st Century Edge City: the city actually at the precipice of the networked global order.

Such "edge cities" of floating populations seem to be uncontrollably springing on the edges of today's developing world "Mega-Cities", who, themselves are drinking at the steep banks of the globalized world economy. In fact, you can accurately call them "Edge Mega-Cities". As Rem Koolhaas intuited, no Mega-City dwells more in the precipice than Lagos. In this regard it is the restless Dubai that Wants to Be...

I find it very interesting that the first phase of Eko Atlantic to rise out of the sea next to Lagos will be the Financial District. Lagos is becoming an Instant Mega-City. It is a Mexico City and Sao Paulo that is just about to attend her first social, one of those "21st Century" freak-cities whose hyper-cultures are global in scales...in scales of grinding desperation, dreams, and empires of wealth. These are cities that have transcended their states in their complete "lawless" growth, except for the fact that they enact their own fascinating internal organization. An improvised organization of orders so bursting with nuclear energy that even Koolhaas can hardly put the right words to them. In an interview for Index magazine (back in 2000), for example, he recounted this aerial observation of Lagos:

...We made an unbelievable video about a traffic jam in Lagos, which is really scary because the sheer pressure makes everything liquefy. There are these jams that are mostly buses — rivers of yellow trying to go through arteries that are too narrow. Huge trucks — almost everything is public transport and trucks — really colliding and squeezing. And in between them, there are these people — almost like cement. According to the myth, they are dismantling the vehicles that are in the jam. Not only are you stuck in the jam — you're also being disassembled. Maybe that's the only solution to the jam. So it's not just a traffic jam. It's actually a traffic jam turning into a car market, turning into spare parts turning into a smoldering ruin. All in consecutive phases. It's really about metabolism and flows and scale. And unbelievable organization.


One can sense here that even Rem, the expert of lawless architecture, is almost at a loss about what to do in that "organization". How in the hell can anyone "plan" with these spontaneous orders abounding all around? He is like Michelangelo enviously beholding his Belvedere torso. Can even the sea stop these people?

It is easy to romanticize these urban landscapes where wild things do so grow. But I find it interesting that even in Lagos land use and transportation planning has a place. Evidence the sand-pumping, Dutch engineered (of course), Eko Atlantic coastal "restoration" project in the video above. ...Still, surely you would suspect that the saturated market/arteries of Lagos would be the last place on earth where a dedicated right-of-way for a BRT system could exist. But one such has actually been recently introduced!...

Heck, if Lagos can do it, what are LA's freeways!? I find Rem's choice of the word "metabolism" to describe the commerce and transitions of scale in the nascent Mega-City an apt metaphor to guide our thinking. Some of these orders exist because of the jam in the gulch. In Lagos, the challenge of urbanism is to remove the clog in the streams of global finance that the people of Lagos seek so energetically. The challenge is to transfer the energy "liquifying" market and transport together in Lagos to global outlets.

That BRT can be implemented successfully in Lagos should tell us that the frustration of the jam was partially keeping that burgeoning Edge Mega-City behind. We need not fear planning for these cities. But, we must be as tolerant and improvisational as their metabolic processes and build on them. You just need to first legitimize these orders and give them access to the outlays of the global market that they actually seek. In this case, yes, that involves laying down a dedicated right-of-way. The planners of Lagos can do stuff to Lagos, actually! Who'd a thought?

In our century, the hungers of the global economy, as well as climate change, will produce population drifts to the Mega-City in scales that we have yet to see in history. Even rising sea levels, I suspect, will not be able to stave that trend, because coastal cities are the most interconnected hubs of the global economy. They will, like Lagos, pump sand into the sea if need be. Do not be amazed if other cities "out-Lagos" Lagos in our century, and in places we least expect. The central challenge of urbanism in our 21st century: How do we bring the urban migrants of the world into the world economy in a way that lifts them out of poverty? What can we do for them?