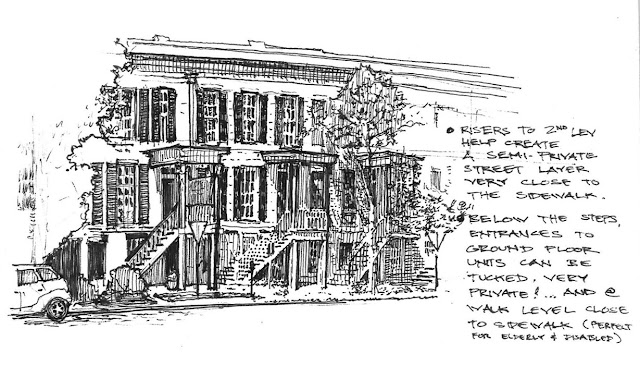 It was a surprise to me to discover on Discovering Urbanism how much content I’ve posted throughout this year long journey thinking about Savannah, following my first visit to the city in Dec. ’08. I’ve begun my forays into Savannah’s Odonomy quite tentatively. That visit to Savannah made me invent this term. Odonomy is the “study of roads”, the study, more particularly, of how to classify their qualities in relationship to one another. More than a taxonomic endeavor, it is an act of synthesis. I have yet to even begin that discussion, I’m still trying to synthesize my fragmentary notes and unwritten thoughts. And still uncovering new realizations that make me reframe my thoughts.

If I plod, it is because the associated topics are both interesting and slippery to me still. Like the cities we love to walk in, they deserve the honor of slowly getting acquainted with. Of letting them soak beneath the skin a little. Of distilling with greater clarity in some warm evenings sitting on the balcony in thought. I had and have a lot to learn yet.

So far, I’ve focused on the easily isolated features of Savannah’s form (or features lacking thereof) that bear immediate comment and can apply straightforward lessons. These can be found on the links graciously provided by Daniel on his post of my efforts …Thank you so much Daniel for providing me the valuable service of indexing and summarizing this! My own fragmented notes turn out to be amazingly more discursive, I now see, when I put them on this blog to communicate to people. I go through the bother, I should mention to you my readers, in order to invite you to perchance help and guide me in the journey. Lend me not just your ears but your insights, please. :)

Too, I haven’t been prepared to really start an Odonomy. Before I really could get into the task at hand, like Louis Kahn, I knew I could not authentically face Savannah before I first sook her “Form” (which I attempted my previous three posts). That is the search for the big “F” Form of Savannah. Big “F” Form, as Louis Kahn preferred to capitalize it, is the Origin, the spirit of Savannah’s “wanting to be”. Big “F” Form leads to the Design, the result of the Form. Today’s Savannah is a result, it is the “answer” of a process. But the process began with the Big “F” Form, the Question. And Louis Kahn knew that, in essence, the quest for the Form was a spiritual Quest, one which the original posers of the Question would not necessarily know they were asking. The Question is asked in “Volume Zero”, not Volume One.

It was interesting discovering what some of those What did’s entailed and how many insights they led to as I ploughed Savannah’s colonial earth for the Question. Most notably to me, Savannah’s colonial Origin has a lot to say about the subdivision fabrics our society prefers. Our society prefers these repetitive patterns for simple economic reasons, sure, but ones that are quite clearly inflected by the confounding social tendency to segregate by class in open, liberal societies. It is a settlement segregation tendency, yes, but, as ABC's Lost and John Locke’s Savannah show us, not the default position. This clumping tendency is in fact in constant tension with our predilection for creating egalitarian relationships when the social stakes are heightened (as in times when groups face common enemies), which can sometimes bridge the barriers of socio-economic divides. This bridging process, instigating the “middle class churn”, does not occur naturally or happily in our liberal society always, but it does occur in contexts of pioneering tension. Urbanism can be a social lubricant of sorts when it invokes a return to Hobbes’ “state of nature”. This is an interesting thought, because the very state that can make life in the city “nasty, brutish and short” is also the same state that, under heightened stakes, sparks the drive to create a muscular civil society and start new economic enterprises. The Others just need to find each other in new reciprocating contexts, something that often requires the coaxing of humanitarian connectors (as well as transformative leaders like Martin Luther King, Jr.).

Savannah’s Origin, in its subdivision strategy, also teaches us how to create the kind of subdivisions with the fourth dimension in mind. She tells us that “zoning” or “transects” may not be all that helpful in that enterprise. What matters more than anything is city form. How streets relate to parcels and how streets relate to each other. That redirection to the system structure points us to a physics of land use form that can adapt with the natural tensions that develop in cities, the unpredictable transformations that occur in cities, legally and illicitly. These are transformations with simultaneous centrifugal and centripetal pulls, transformations that do not meld in a stepped or layered order, that are the result of those unstoppable exercises in low-level conflict that cities never cease to enact and re-enact. The real “transect” of the city, my friends, is fissured and layered. In real and normal cities, there are always cracks and bumps and islands and abrupt disruptions living in and between those so called “transect” zones. These families of errata actually make cities resilient, and make them work socially and churn economically. The ideal section of a healthy and dynamic city is more a fault line slip than a transect, I suspect.

…Interesting philosophical ponderings, but, for the purposes of this present Odonomy, just background issues to think about. For now, let me pull aside from the Quest a little. Let’s leave it for another warm evening on the balcony.

The task now at hand is what is. The lower case “form” of Savannah today. This form represents quite a different city, both in its present structures and its transportation dynamics, than the city Oglethorpe founded and intended to perpetuate across the young, hot earth of Georgia. By narrowing in simple terms on what is—by asking simple, straightforward questions about Savannah’s form—is how we will get quickly to her deeper insights. The way I first began to ply open the book of Revelation quite usefully in contrast to my apocalyptic brethren, for example, was to ask far, far simpler questions than they. Questions philologists ask; not the questions dispensational televangelists, misanthropes or psychopaths ask. I asked not who the “beast rising from sea” represented and not if the “beast standing on the land” might be Obama. I asked, “Why does the beast from the sea arrive first?” Hmm…funny that succession seems familiar. Oh, hey, that’s interesting, the first beast that appears, actually, is the beast that falls with some of the stars from the heavens in the chapter before. Wait…Star Creature, Sea Creature, Land Beast...Doh! Genesis One again. …Boy, does this author have a literary method!

So,…the question is: What is Savannah’s present method?

Well, like Genesis, I’ll begin answering that with simple, higher-order divisions and proceed down from there. Next week, we will revisit the primordial garden of Odonomia and begin naming, dividing and pairing things. No longer will we just tip our toes in to feel the temperature of the water. Finally, our journey is on toward an Odonomy of Savannah…
Posted by Eric Orozco at 9:15 AM