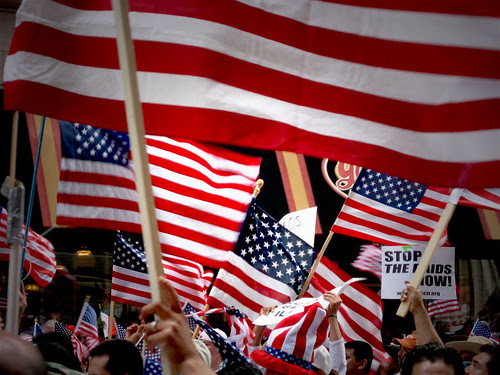 Not that my endorsement is worth a flip...but I thought I'd make it official: I'm voting for Barack Obama and Joe the Senator. Like my two readers haven't guessed by now. :)

Let me just say a couple things about this endorsement. It has not been as easy as I've might have led on.

First, I really do have deep discomforts about Obama's stated strategic policies concerning our intervention in Iraq and Afghanistan. First among which is the way he cavalierly treated our relationship to Pakistan in recent debates. The last thing we need folks, in removing Al-Qaeda, is to overlook the unthinking mess we might create with a nuclear-armed regime and a bunch of nationalistic Pakistanis, who are battle-hardy and not necessarily push-overs and moderate-leaning. How we deal with Afghanistan has 100% to do with what is going on in the rest of the steppe and that means pointedly, Kashmir, and our relationship with India. We're not dealing with the real issues if we're not willing to deal realistically with the larger concerns of the Pakistani people.

But this is a time of many concerns and (gasp) greater threats to our national stability and freedom are on the line. The quality of the character, intelligence, pragmatism and leadership potential of the candidates therefore has to be my top priority. Fact is, Iraq and Afghanistan may not be the only countries in dire straits. Scared as I am for the fate of the M.E., I simply can't afford to make my decision on one issue. I'm praying that Obama is as wise as he seems, so that he may chart a more realistic course than he's stated. I can trust him. James Zogby's endorsement of Obama has given me some comfort.

But I can't trust McCain.

As a Latino, the most disappointing thing about this past year has been to witness a man who I've held in great affection and esteem, an honorable man, a decent human being, a highly principled man,...summarily (and without much effort it seemed to me) betray my estimation of him by compromising on all his once stated values. I'm wounded by McCain's betrayal of his once notable, conscious-laden stance against his party's policies concerning immigration reform. I am saddened by his seeming complicity with his party's complete disregard for decency by shamelessly employing political terrorism and fear-mongering with tactics reminiscent of Jim Crow days. I am willing to tolerate negative ads, but really, this is beyond me. This is unprincipled as unprincipled can be. This is intolerable. This is reversing every strive we've made since Civil Rights. A man who would allow this kind of conduct in his campaign is willing to compromise sacred American values. This certainly is not the kind of quality we need in a leader to lead America in our century.

We Luv America Too!!

Barack Obama: A mosaic of people, originally uploaded by tsevis.
Posted by Eric Orozco at 11:19 PM No comments:

A walk in the rain 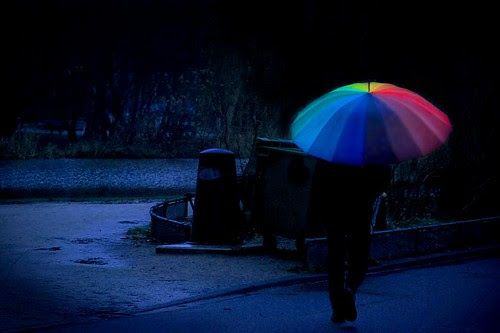 A walk in the rain, originally uploaded by marcelgermain.

My oh my....This next week is going to be nail-bitter....considering what's happening with banks around the world. I just pray that we've seen the bottom already. One thing's for certain, voodoo economics and Thatcherism is done with.

Regardless of what happens, it is a time for personal reflection, not for fear or downcast illusions. It is a time for walking in the rain...a time for dwelling in booths...for renewing our lives...to be cleansed...to return to the beginning...

Posted by Eric Orozco at 5:21 PM No comments:

...I was wondering when reality t.v. would finally come to architecture studio....
Posted by Eric Orozco at 11:22 PM No comments:

For its relevance for Americans, watch this.

And that's what I also call people-backed securitization of our global financial system...The deeper solution to our current crises.
Posted by Eric Orozco at 12:02 AM No comments:

Every once in a while, a designer sees an arresting representation of all his values and best hopes for a dream commission...realized in someone else's work. Wow!...is all I can say. My hat of respect to Subarquitectura for their tram stop in an Alicante roundabout. How this project understands the necessary nature of public space, the utility of a transit stop, and activating a no man's land in the process with a celebration of destinations, both earthly and fantastic. Thanks for that example.
Posted by Eric Orozco at 10:57 PM No comments: 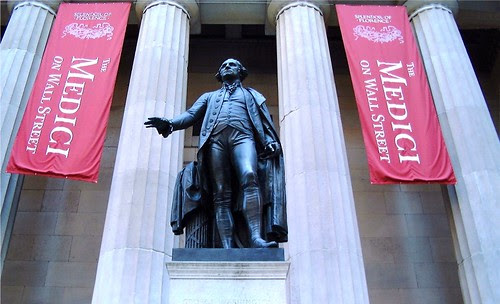 Tyler Cowen's top two (related) reasons why we have a credit crunch:

"1. Collective stupidity: A lot of Greeks believed in Zeus and a lot of people in 1938 thought Hitler would be good for Germany. They were just plain, flat out wrong. I'll also put "model error" under this heading. The relevant stupidity concerned both the fate of home prices and the degree of acceptable leverage.

"2. Writing the naked put: This is Bob Frank's main explanation, noting that he uses different terminology and adds a relative status dash to the argument. If you don't know options theory, just imagine betting against the Washington Wizards to win the NBA title every year. For a lot of years you'll earn super-normal returns, but one year (not anytime soon, I can assure you) you'll be wiped out. That is essentially the strategy the banks were playing. They were going "short on volatility," so to speak. In the meantime they reaped high returns and some amazing perks for private life. It's hard to just call the party to an end, even if you have a relatively long time horizon."

"And of course if you can actually make the bet with other people’s money, leverage the hell out of that money, and then make your take-home pay in the form of fees taken from the annual gains rather than having too much of your money tied up the principle, you do even better. There’s probably not much of a regulatory solution to people making bad bets in this way. But between now and whenever the next bailout-requiring crash, I’d like to see much higher taxes on the super-wealthy. I’m not that concerned about preserving incentives for multi-millionaire financiers to keep doing their work."

Now THAT was a sucking sound! 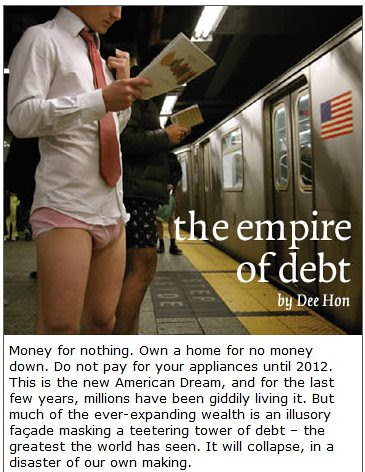 The Empire of Debt by Dee Hon, originally uploaded by Renegade98.

Reading my last post, I realized now that it was slightly prophetic without my knowing...I did not realize that WaMu's instant demise would suddenly open an abyss close to home. While Charlotteans were busy trying to find gas that weekend a silent run had begun on Wachovia the next day as depositors and shareholders became concerned with Wachovia's similar toxic holdings. We woke up Monday with the news that Wachovia had been parceled out to Citi Group. Just a week before, Bob Morgan, our chamber of commerce head, had been feeling a bit dapper and slick, stating in Time magazine's Postcard that Charlotteans "wanted to be number two to no one" (meaning of course New York) and here we all a sudden find a smirking New York dandy was riding on our number two filly (and top employer downtown)...My of my, how humbling...As they say, hoss, "Pride cometh before the fall".

These are amazing times for a tragic-moralist flaneur. Who can literally compose a sicker tragic drama worthy of Aeschylus than the sheer indictment of hubris that is transpiring before our eyes?? Just start with the finest piece of radio ever produced and go from there....It gets wickeder, wilder and my so much more chilling than anything Chrichton and folk can come up with. Just following the carnage of the dominoes falling is a surreal experience. I keep looking over my shoulder and I swear I just heard the voice of Jeremiah calling out from the hoary past....It is a time to be on bended knee. A time of reckoning.