As an update to my previous post, check out what creative New Yorkers are doing with empty store fronts (from the spectacular new blog Polis).

High Street Blues in the UK

...I keep one of my search widgets on my Netvibes web portal looking for Miles Davis related YouTube postings. Imagine my surprise when I viewed the above post by UK retailing consultant Brian Moore. Sometimes these kind of nuggets of information to what is happening in the world of markets and urbanism arrive by sheer happenstance.

The video commentary deals with the rampantly imploding town centers of the UK and is interspersed between the depressing photos of mixed-use towncenters turning into, well, into mixed-use ghost towns. Imagine that. Old/New Urbanism going caput...Makes me wonder how long before similar things begin happening in our spanking new walkable town centers and revitalized downtowns. Among the things that Moore says about Britain's retail landscape is that the recession has been driving businesses "out-of-town and online at the expense of high street", a stark contertone to the retool and re-localize recessionary panacea we keep offering as urbanists.

The photos look convincing and with scary figures and forecasts interspersed, Moore makes a claim that this recent phenomenon is more than a blip in the UK. Britain's bone-headed "empty shop tax" might be reinforcing the process of decline, and one of the things Moore claims is that "store closures (represent) a long-term structural issue, rather than simply a short-term cyclical effect of the recession". I wonder how much of that is true, and what Moore is implying about the ability of UK retailers to pare down for High Street. Is the downtown eviscerating donut back in our horizon? It will be interesting to watch whether British urban consumers get used to online retail or commute out of town for laptops and groceries. My oh my...a lot to watch and think about here.
Posted by Eric Orozco at 10:56 PM 2 comments:

The Invisible Signs of Savannah

The Odonomy of Savannah II: The Case of the Invisible Signs

Savannah is well loved by this blogger for its active street frontage, its romantic buildings, its strangely abundant rows of townhouses (strange, that is, here in the South), its demure and pleasant gardens, and those redolent live oaks making the streets of the city beloved, well-shaded and well-lived. But among the things that I love about Savannah the most is what it doesn't have. Thanks Carfree and Eli for pointing out some missing items that should draw more attention to the elegance if Savannah's fine-grained street grid: the strange scarcity of stop signs and signalized intersections in this city.

To draw out my point better, I've decided to compare the First Ward of Charlotte, which has a typical downtown grid, with an equivalent area in the Historic District of Savannah. (Much of First Ward was formerly the Earle Village projects of the Charlotte Housing Authority, which is a well-known, early '90's Hope VI redevelopment that was among the first - and very successful - introductions of New Urbanism to Charlotte.) Below are images of the block pattern of First Ward and of Savannah's Historic District, each showing an area of exactly 1/4 square miles: 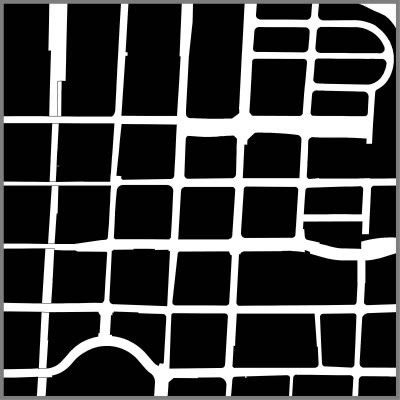 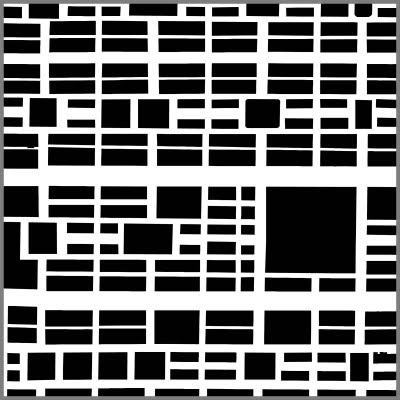 I should first mention that the street areas depicted in white above are the public rights-of-way only (I don't include internal drives). In the case of First Ward, I decided to include the present and future light rail right-of-way (which is part of the "transportation grid" and also creates/will create signalized intersections in the transportation grid; it is the north-south right-of-way corridor furthest to the left).

Charlotte's First Ward is relatively well-connected in terms of street connectivity and represents about the best we can hope for in most southern cities. With more development coming, the large meaty blocks (many are still surface parking lots) represent a lot of future revenue for our city. There are also only 40 intersections in the First Ward study area--much, much less intersections to control or maintain than Savannah. Savannah's study area, in contrast, has a whopping 203 intersections, more than five times First Ward's! But here is one surprise. First Ward has 16 signalized intersections (40% of its total intersections), while Savannah, in all that arabesque madness, only has 13 such intersections (6.5% of the total; these are located along the main east-west boulevards of Broughton, Oglethorpe and Liberty streets). Using Google Streetview I've counted all the intersection types for each study area. Here is the breakdown totals of intersection types for your reference:

The majority, over two-thirds, of Savannah's public right-of-way intersections contain a yield sign or no sign at all. I wonder if such a remarkable feature can even be contemplated by Charlottean planners. Yes, the number above is right, folks, 36% of the Savannah Historic District public right-of-way intersections have no sign controlling intersection traffic! These "implicit yields" are controlled by the environment itself. Intuitively, we all recognize that a narrow and constricted entrance to an intersection with a wider street is a "stop" or "yield"--even if we don't see a sign. Everybody understands that the intersection of an alley with a street represents an implicit stop, just as everybody understands that you don't need a stop/yield sign at the end of your driveway. Savannah knows this and allows the intimate scales of its fine-grain environment to dictate traffic control. In reality, most of the yield signs are not really needed at all, much like yield signs are not really necessary for roundabouts. Traffic engineers just seem to want them there for liability reasons, but, so long as one understands the direction of traffic flow, Savannah's grid is so driver intuitive, that I'm probably right in saying that most drivers do not even register or think about the yield signage as they meander through the city grid.
Posted by Eric Orozco at 2:55 PM 2 comments:

Labels: odonomy, Savannah, the details of urban design, The Odonomy of Savannah Series, when what is lacking is the design

Can you spot what is missing here? (Savannah Odonomy Series, no. 2)

Just follow the cyclists and ride around the park. There are actually several elements missing present in most city grid streets. Warning. Neither Copenhagen nor Portland will be of much help to you here. There is one really obvious element missing (that I will base my next discussion on here). But you may find one missing element or two that I have not thought about. For now, just stay on the loop. Once you think you know the obvious element that is missing, branch out to the next parallel loop of surrounding streets (or alleys) and see another surprise.

The way I was taught to read "great design" in school was to start with what was missing. It always stunned me what other people observed about good design. I hope the same can be true of the blogosphere! Happy sleuthing.
Posted by Eric Orozco at 12:11 AM 3 comments:

Labels: odonomy, Savannah, the details of urban design, The Odonomy of Savannah Series, when what is lacking is the design
Newer Posts Older Posts Home
Subscribe to: Posts (Atom)