Deep in the Blue Heart of Texas

My time in Austin, though brief, turned out to be well worth it. I had a chance to see the end of line station for the MetroRail light rail, which is set to start service in March. I was surprised to find it in a so-far virgin prairie outside of Leander, Texas (more of my photos here). I was a bit puzzled by its relative isolation, not just to adjacent development but to the road network accessing surrounding suburbs. Perhaps, in the future, Austin has plans for constructing a ring road in these far out parts, but I did not find much networked regional transportation logic in my brief survey of the area. Note to transit providers: End of Lines need to be treated as regional hubs!

I was also surprised to find that the only recent development in Leander is a very conventional strip mall (anchored by an HEBplus) on the other side of 183 from the station. Nevertheless, the station envelope was executed excellently, with (more or less) xeriscaped landscape and outstanding bus shelter designs. Clearly a design to celebrate the Central Texas cattle country. Ringing the Park and Ride is a walking trail that in the future will access the TOD being planned for Leander. Serendipitously, the next morning I caught a story in the Austin American Statesman about the redevelopment of the old Airport site into a New Urbanist community named Mueller (photo below). Bill Kohl, a U.T. Kinesiologist will be studying the neighborhood to gauge the health benefits of this walkable community. I did observe many of the (very recent) residents of Mueller strolling about and walking dogs on the still unlandscaped walks and trails. 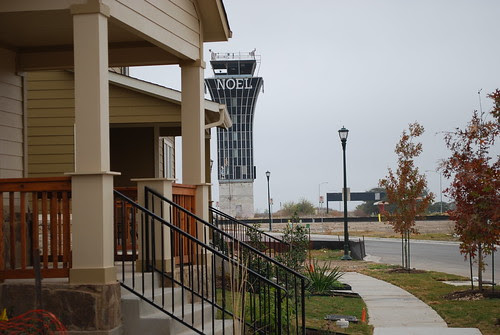 Posted by Eric Orozco at 4:55 PM No comments:

It's time for a trip down memory lane again...

I'm eager to roll into Austin again, not only to catch up with fam and friends, but this time I can't wait to check the progress onthe Capitol MetroRail, which is set to start service next year. One of the stops, it is my pleasure to note, is on Howard Lane, near my first boyhood home in the U.S. Somehow life comes full circle for a transit urban designer...

Posted by Eric Orozco at 8:35 PM No comments:

I knew it was only a matter of time before hipster hoods got savvy. :) The first to flare itself out for panoramic voyeurs is Sampsonia Way in North Pittsburg. (Thanks Chris T.)
Posted by Eric Orozco at 6:03 PM No comments:

...I know bikers complain about the safety of Uptown's one-way streets. Take a minute to see how SoCal bikers handle arterials. The principles should be the same. If they honk that's a good thing.