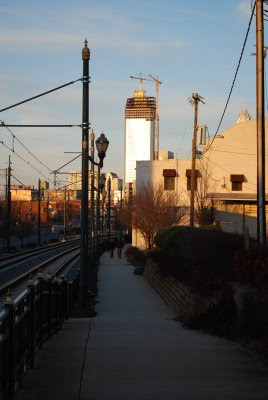 Well worth watching! ...And my home, South End (above), figures pretty prominently in the video. :) That's right, the stimulus should be about creating more South Ends.

BTW, those stations are partly the work of my firm. ')
Posted by Eric Orozco at 9:05 PM No comments: 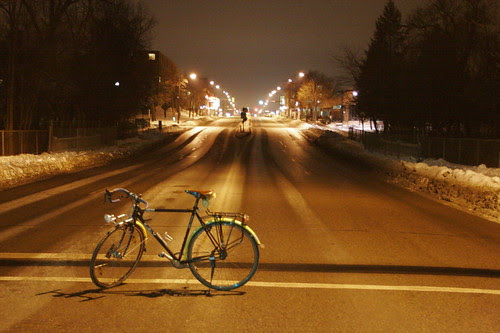 ...Because Nikki Giovanni's new work Bicycles is worth it....and its midnight after a hard day of CAD-ing roads and walks...(Thanks NonsuchBook)....

Midnight poems
Sing a sweet song
Saying everything
Is all right

The dog thinks
I need a kiss

Bicycles move
With the flow
Of the earth

Steve Whitby, "pastor of Creativity" at my po-mo church Warehouse242 (an ambitious reference to Acts 2:42 - stressing corporal edification by sharing talents and resources...also in warehouses...for we do meet in one...after all), asked me to contribute an introduction to our next artistic endeavor, corporately composing a graphic novel to follow our next sermon series on scenes from the life of Christ. Each sermon of the series is based on a scene taken from the Sistine Chapel's seven "Stories of Christ" panels.

What Steve doesn't know is that, in fact, I'm possibly the slowest person to pick for this task, since it touches on almost every intellectual foray I've undertaken. In fact, it manages to bring all my discordant degrees and studies into play...So I can literally write a book or several even just on this topic. I haven't written an introduction so much as begun a background piece that may help me write it...once I see the work of the artists contributing to each sermon's graphic short story. We'll see.

Since I'm putting my energy into this that I would perhaps be putting into blogging instead...I thought I would post my progress to the wall of my urban designy blog. While what follows below does not seem relevant for city shaping topics, I do promise to bring urban design into later installments. In fact, all my thinking on urban design is related to themes that shall surface below...and informs my practice. I hope you enjoy the foray into numinous topics. But if not, perhaps wait one or two months before dropping in on me he-yah. :) I want to return to my original purpose of this blog, to journal about my actual life, my relationship to the city, and my theoretical development. Cheers!..........

SANCTA MEMORIA
What Medieval Pictorial Narrative Has To Teach Us

Place is something the soul itself makes for storing images.
- Albertus Magnus, Dominican Friar in , 13th Century 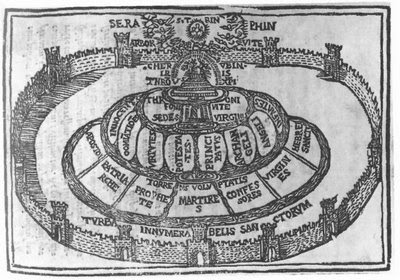 In the Middle Ages, the role of architecture was to shelter body and edify soul. (I say “architecture”, but I mean to include “visual narrative”, for art in that period was seen as an embellishment of architecture.) The greater population in those days was, for the most part, illiterate, and so, for quite pragmatic reasons, churches had to convey the sacred stories of the Bible pictorially. But the role of transmitting sacred history in medieval architecture (and art) tends to be overemphasized. In fact, if you were able to ask an ancient learned person in Trecento Florence, particularly a skilled rhetorician, what role “Architecture” represented to him, you would probably have been surprised by the answer. He would have winked at you and said, “To remember”…or, “To prepare a lesson”, or, “To revisit topics that have long puzzled me,”…or, even, “To discover insights that I have long overlooked among the subjects of my learning”. Architecture, you see, was a physical embodiment of human knowledge. It served a rhetorical purpose. Not only was architecture used as a vessel to transmit knowledge, but it even provided the springboard to new insight.

How could a 14th century philosopher be provided with such a conception about architecture? Simple, you need to first know that ancient thinkers did not have readily disposable pieces of scratch paper lying around to jot down their brilliant flashes of insight. Nor were some of them even trained to write well. Paper came only into common usage at the end of the fifteenth century. Previously, if they did have access to scores of papyri or vellum parchments, they would probably not have composed on them random notes of scattered thoughts, brainstorming exercises (yes…I know DaVinci was a quirky exception), annotative outlines or what you and I call “rough drafts”. Most thinkers certainly would not have recorded anything on them without first deliberating what was to be said to perfection, and that they would only write down slowly and painstakingly. That was not a process conducive to unbridled thinking through writing. One gained the temerity to pick up the quill feather only after first deliberating long and thoughtfully where you were going with a given thought. The medium was too precious.

They did have wax tablets and sand, of course. Unfortunately, if you used these, you would soon find yourself, after a flurry of thoughts, suddenly running out of space. You would have to go back and erase what you wrote, defeating the purpose…Or, worse, someone just as eager to record a thought would inevitably erase your precious scraps of unformed discourses, mistaking your storage for later as a sign of neglect (or, someone would mindlessly step on your sand writing). So what these folks had to resort to, as strange as it sounds to us today, was to sit down and memorize the elaborate thoughts they wanted to recollect and rework later.

Fortunately, they had incredible memory tricks at their disposal. One of the most important skills they cultivated was to use buildings and images as tools for recollection. First, they would literally memorize the spaces of memorable buildings, noting not only their rooms and structural elements, but also the various decorative reliefs and murals on the walls. They analyzed every square inch of an illustrative work or painting, noting what the subjects were doing, what they were carrying in their hands, and so on. They would then use these symbol-laden elements as associative hooks for thoughts they wanted to store. Literally, the architecture/artwork became a “place” for them to hang their thoughts.

The role of art from antiquity through the early Renaissance, particularly in ecclesial art, was not only to embody human knowledge but to aid the practice most important to intellectual prowess in those days: rhetoric. Moral and philosophical thought, including prayer and spiritual meditation, were pursued using the techniques of rhetoric. ’s writings, for example, are merely recorded works of rhetoric—“speeches”, really. The memory technique described here, called “architectural mnemonics”, was perfected by the early Greek philosophers, who were all skilled rhetoricians.

Architecture served as a tool to aid the speech-maker. To understand how this worked, say you were composing a sermon. As you reflected and came upon a statement to make, you would look to attach it by association to an element or artwork of a building, typically an image-laden church. For example, if you wanted to make a point about the capricious actions of a certain Medici boss (who shall remain unnamed) you would try to imagine him as King Herod in the nativity panel series. You did a similar thing with all the other parts of the sermon. As you composed the discourse in your head and strung your various points to artwork by associative links, the composition would literally start to take shape on the church walls. When it was time for you to deliver your speech, all you had to do was to retrace your prepared discourse through your mental image of the church, from element to element, art panel to art panel. As soon as you came upon the Herod image in your mind, you would think “Medici boss” and immediately recall the moral point you had stored for that portion of the speech.

Imagine being able to recall an entire discourse spontaneously and without great difficulty! But there was a second advantage produced by this technique that was in some ways more significant than mere recall. Obviously, the church would force you to work with a pre-existing tableau for your own arrangements of meaning. This was not such a great a straightjacket as you might suppose. You just had to be pretty creative about your associative linkages. Maybe, instead of using the Herod painting, for example, you imagine the Medici boss with head of one of pigs in the Gerasene Demoniac painting. This would help you to better transition to one of your other related points regarding the abuse of ferrymen and farm laborers. In such a way, the church would invariably order your prayers, sermons or scholastic/philosophic discourses. Not only would the church hold your orations sequentially together—like a pastor’s notes on the lectern—but it would also prod you to reconsider and rework your thoughts as you extemporized new insights from the networks of pre-existing associative links you had already built up on the walls. This often led to surprising insights that one would not have found otherwise. The church would thus marvelously become a vessel for private revelation. What would inevitably happen is that an orator would deliver a better speech than he had prepared. He would have plenty of moments of unanticipated, inspired insight.

Sometimes, among learned monks, the vessel of deriving “Holy Ghost insight” from associatively preserved memories was not a church or a panel of art but passages of scripture that they were thoroughly familiar with (which they typically were since some of them spent most of their time copying scriptures). For example, if they had the first chapter of Genesis memorized, they would use the seven day account of the creation story as a “place-holder” for their thoughts. By making associative links to the elements of each day, they could compose a seven-part prayer or sermon that could be recalled later to share with others or to reflect upon further. This insight to the latent creative function of Biblical narrative, the art of recollecting and composing ideas by using a narrative or poetic substructure, was called sancta memoria. Art panels in churches served a dual purpose, to provide communal narratives and to provide visual props for sancta memoria.
Posted by Eric Orozco at 2:23 PM No comments: