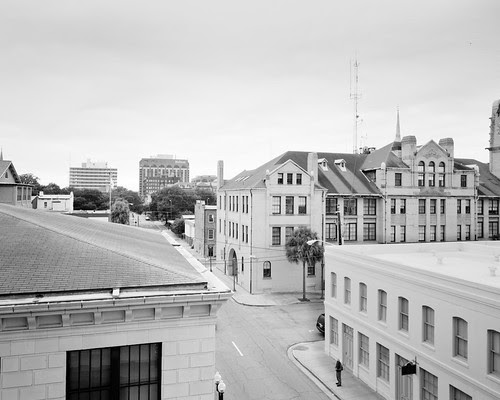 Not long ago, reflections on Savannah's Historic District prompted a study to examine the street roles of Savannah’s Historic District grid. The broad aim of my attempt to classify her street types is to produce a kind of working classification system of urban streets that I call an“odonomy”, a taxonomy of grid streets giving names to distinctions that tend to remain unobserved due to present ways of thinking of streets. Just providing names can provide a starting point for further reflection regarding their interdependent roles. This is needed because when it comes to grids, urban designers tend to focus only on quality of connectivity and intersection density, but then allow traffic engineers to dictate the section of the streets, who I believe apply the inappropriate functional classification system of branching networks to grid streets.  A devastating lack of awareness thus exists in how you lay out or modify streets to actually create a traffic behavior supportive of fine-grained urbanism and multimodal balance. With a working and deepened odonomy, in contrast, a project team can employ network-defined categorical distinctions for street types from day one of design work and remain highly conscious of network roles and the subtle advantages their functional strengths can provide for development. Trade-offs can be described and opportunities be made visible. For the context of what follows, I recommend reading posts tagged in The Odonomy of Savannah Series. I especially recommend these two short posts on The Invisible Signs of Savannah (on Intersections) and The Avenue in order to get a flavor of what this study is about.

An Odonomy of Savannah Recap: The "Grain" of a Grid and What That Means for Mobility

Savannah’s historic grid affords clarity for the challenge of creating an alternative to the “functional classification” for the street types of grids, since it is almost unique to grids in the fact that it consistently differentiates many types of grid streets. The functional diversity of Savannah street types guides the evolution of Savannah’s urbanism in a way that can be easily read and brings their virtues to the surface. Thus far, I’ve uncovered two sets of obvious contrastive relations distinguishing Savannah streets from one another. Before I advance my odonomy of Savannah, a little review is in order. In this post, I shall review and build upon the first distinction I observed. 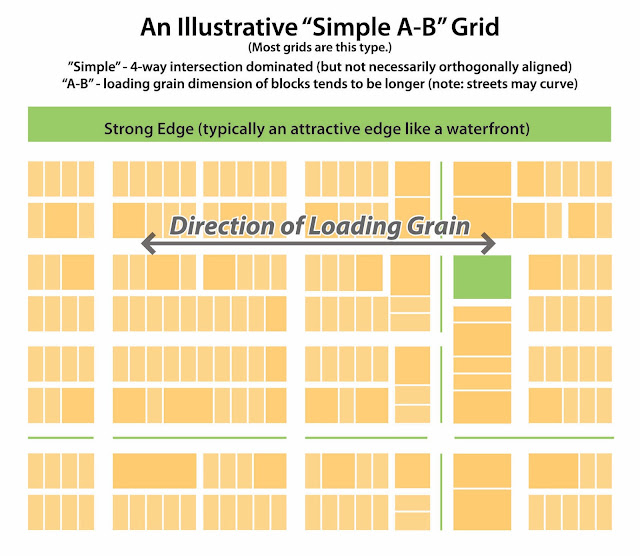 The “loading grain” is the orientation of the grid along which most of the “street address” streets are traveling, the street orientation that is favored for frontage.  Previously, I called the grain traveling streets collectively “Loading Streets” and the cross-grain traveling streets simply “Avenues”. I have decided that the far more descriptive and accessible terminology will be to refer to the former collectively as “Grain Streets” and to the latter as “Ray Streets" or the "cross-grain" streets.

The contrastive term I've chosen for "grain" is "ray", a reference to the medullary rays in wood.  These are ribbons or sheets of cells that radiate outward from the heart of a tree trunk.  If you look at the end-grain section of a cut of wood, these rays are the slight striations crossing the growth rings perpendicularly.  (I thought also of using the term "Check Streets", in reference to the "checks" or radial splits that you often see develop in wood stumps, but I think this term would be far less accessible and lead to unhelpful associations.) I think "ray" is appropriate metaphorically also because I like the fact that medullary rays help with structural support and help protect the inside of the trunk by conveying resins to check and destroy pathogens.  However, I mostly like the term "ray" because, in the general meaning of the term, it suggests directness. By using these botanical referents, moreover, notice that I am conveniently avoiding the use of terminology that leads to thinking of grids in purely orthogonal terms.  A grid system can be thought more carefully as a polar system dependent upon the curvature of grain streets. Frederick Law Olmsted and John Nolen employed curvilinear street networks this way to create adaptive grid-like street patterns that curve with topography (the results are there for you to enjoy in the streets of Nolen's Myers Park Neighborhood in Charlotte).  Therefore, we can talk about curving "grain" and converging "ray" orientations for curvilinear fabrics as well.


The Grain Streets are the streets that prominently serve and access uses by providing the primary frontage for the majority of the parcels. The Ray Streets, on the other hand, primarily serve the grid by facilitating travel mobility in the grid. While Ray Streets take up real estate (the main reason these streets are largely absent in the street networks of postwar suburban subdivisions), having lots of these in your grid has a tendency to amplify transportation mobility, since, besides multiplying travel options, they typically remove or soften the conditions that lead to queuing and friction impeding vehicular movement. When employed well for their natural virtues, they not only distribute traffic efficiently throughout the grid, they actually help it move faster for all modes.

Those ray street virtues are amplified even more in Savannah by treating the avenue traffic as one-way flow on north-south couplets bounding the cellular wards.  Indeed, observing Savannah’s one-way, two-lane avenues in action affords the easy realization that these streets do not have to be wide to move large volumes of traffic rapidly. Clocking my travel times in my vehicle during peak times, I noticed it took on average close to half as long to travel in the north-south cross-grain direction of the Savannah grid as it did to travel the same distance in the east-west direction on grain streets such as Liberty Street and Bay Street (except on those few occasions when I was lucky to catch all the green lights on Bay Street).

Remarkably, those ray streets in Savannah also do not pose much of any barrier for either pedestrians or vehicles crossing them since one-way traffic “platoons” enough to offer sustained breaks for crossings. Drayton Street, pictured in Flickr user adamtrevillian’s photo above, as well as in my “Proper Scale” banner at the very top, is one such street. Notice how quiet and easy to cross it looks - that is often the predominant experience of the street to pedestrians encountering it, believe it or not. The traffic appears to be "missing" much of the time. Indeed, the photo above exudes the lonesome quality of Charles Sheeler's or Edward Hopper's precisionist works. You wouldn't know that this is one of Savannah's most heavily traveled streets. (But notice, in the distance, the traffic platooning behavior in action in the far right of my banner image.)

While much of Savannah's avenue efficiency is gained by treating the internal avenues as one-way couplets (such as the Whitaker Street and Drayton Street pair), in fact, the "ray street" function in itself has a role in keeping traffic moving along speedily. The predominant distinction of ray streets in the A-B Simple Grid is that they have many more intersections on average for the same length than grain streets. Queuing is minimized in Savannah's ray streets not only by removing opposing traffic for left turning, it is also the result of the fact that these streets cross a tremendous amount of intersections, allowing traffic to enter and turn off at more points than just at major intersections, hence allowing vehicles more options or more direct routes to their destinations. In other words, queuing through traffic needs to wait less on the Ray Streets than it would otherwise need to do at major intersections. Astoundingly, the abundance of minor intersections is not a great hindrance for avenue traffic because crossing grain street traffic must yield to these streets everywhere except at the crossings with major grain streets, which only occur every 1/8th mile or greater.  From Liberty Street to Gaston Street, avenue traffic doesn't have to stop on Drayton at all, a distance of almost a third of a mile! (A remarkable feat for a grid with a 600+ intersection per square mile density.)

Strangely, this first-order differentiation just described between "Grain Streets" and "Ray Streets", as obvious as it might be, hardly seems to penetrate the consciousness of planners and road designers. I suspect this is the fault of thinking within the framework of the normative arterial-collector-local (branch-network) classificiation system.Yet this is the most important distinction between Savannah’s street types. These two characters also comprise the two predominant street types of most grids since almost all grids exhibit loading grains subarea to subarea. In truth, the distinction between grain streets and ray streets is not as important for the common "gridiron" Simple A-A square grids, especially the large block gridirons such as the one found in Uptown Charlotte, where the loading grain tends to change so often it could be irrelevant. But it is important for the common U.S. Land Ordinance or streetcar grids, which typically contain blocks twice as long in the loading grain direction as they are wide (660’ x 330’- a furlong by half a furlong). Savannah’s grid makes such an importance patently obvious. Try as hard as it may, Drayton Street can never become a Broughton Street, and there are several very good reasons for this that have little to do with travel lanes, sidewalks, building relationships and width. The functional strengths of each street are simply different for reasons of grid geometry.

The functional classification systems used or being modified by engineers and planners today are terribly misguided for many reasons when applied to urban conditions, but one big deficit they all seem to share is that they tellingly ignore the Ray Street as a distinct urban type that needs special attention. I’ve argued that the humble, no-frills, frontage avoiding, utilitarian avenue, in fact, is the most urban of streets. Without it, you tend to create grids that behaviorally imitate the branching street networks of the suburbs by attempting to maximize the loading condition (Jarrett Walker introduced an apt term for these tree-like suburban networks: “dendritic” street patterns). Urbanists seem not to be aware that the default street setting that they depict in their street sections actually imposes dendritic behavior into grid networks. Sometimes New Urbanist leaning planning departments codify frontage relationship by law regardless of street function.  Such form codes will invariably encourage the creation of grids exhibiting dendritic behavior by stiffening access management, creating street sections that are friction prone (slowing transit), funneling traffic flows in grids and thus creating heavier queuing conditions at intersections (making pedestrian/cycling crossings problematic), and eroding mobility overall by cavalierly removing vehicular through connections. Even New Urbanists who are aware of network advantages keep themselves boxed in the same paradigm as their engineer brethren by distinguishing urban arterial streets primarily by width. Really? How helpful can that classification strategy be when what a street needs in terms of multi-modal capacity is primarily dependent on the transportation network and the area context? In my opinion, their latest papa-bear, mama-bear, baby-bear urban arterial classification system applies, properly speaking, only to the default setting of suburban street networks.
Posted by Eric Orozco at 2:14 PM No comments: