It seems whenever urbanists discuss development and density issues, I often encounter an assumption that travels widely among urbanists: that the urbanism of Jane Jacobs looks no higher than the mid-rise building environment seen in the photo above. No doubt that the urban village Jane Jacobs loved in The Death and Life of Great American Cities is that mid-rise level urbanism of Greenwich Village and Boston's North End (photographed above). Clearly, Jacobs takes in the book what seems to be a kind of pragmatic, middle-ground position on the topic of residential concentration for urban vitality. If density is too low, she argued, it would fail to foster supportive diversity for primary uses, but if it went too high, it would risk imposing standardization of development with building mono-typologies and thus lose the housing variety needed to support a diverse enough population.

The problem here is the numbers.  Jacobs provided a very rough (and qualified) lower and upper limits for "optimal density" in the "Need for Concentration" chapter (Ch. 11), giving the range as 100 to 200 dwelling units per net residential acre. Urbanists, I'm afraid, widely assume the North End is the upper range for this kind of optimized typology and peg her as a mid-rise urbanist from thereon out, never bothering to take a careful look at the numbers provided. Death and Life here is taken wholesale as a paean for 4-6 story urbanity - that "just right" Mama Bear density that neither creates shadowy downtown canyons, nor 2-level rowhouse sprawl. Frankly, I suspect many urbanists interpret Jane Jacobs's requirement that "most blocks be short", her second condition for generating diversity for urbanity, as meaning staying short height-wise (she meant length-wise).

In this 4-6 story vision of neo-Jacobsian urbanism, we urbanists are quite comfortable operating, I must say. Our personal experience of Greenwich Village and the North End bears it out. We jibe with that kind of close-fitting, yet not too high, urbanity. If buildings got any higher, our snug alleys and pocket parks become subsumed in ominous Gotham city shadows.

But as a land planner, this chapter always startles me when I see the numbers.  In no way do I associate, as Ed Glaeser does, 6 stories with 150 dwelling units per net residential acre! This is at least 8 stories, and that's if parking areas/structures were not to count as part of the residential acreage.  With parking,150 dwelling units per net residential acre (150 DUA for short) looks like a district with a healthy mixture of development that includes many 10+ story high rises. Think Portland's Pearl District. 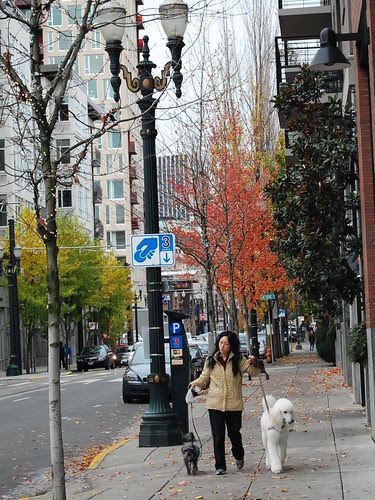 Why 150 DUA needs buildings taller than 6 stories is a matter of how buildings use blocks.  Most importantly, residential units just do not like to get any deeper than 35 feet from the nearest window.   This fact alone means that your footprint can't match the lot perimeter.  When your blocks are 330 to 400-foot wide (as they are for the vast majority of pre-war urban districts in North America), mid-rise multifamily lots are pretty much stuck below 70% building coverage, not just for architectural taste, but for human needs. (In Portland, the smaller blocks help bump up coverage efficiencies. ...As Jacobs said, frequent streets are good!)

Yes, architects can cut into the open space with projecting wings (like those skinny Brooklyn flats with the plans that look like the white piano keys), but, what that means - and why we are loathe to do so beyond 70% coverage - is that your lower units start losing access to sunlight at 4+ story heights. Even Jacobs notes the disadvantage of coverage that is too high in Chapter 11, discussing the North End in particular. The block on the left side of the North End photo at the top, for example, had 72% building coverage in 1960 - way too high for comfort for her (actually, she called it "intolerable"). That is why it was 123 DUA in that 4-7 story height range.

For most 1-5 acre lots, 60% lot coverage for 6+ story multifamily development is a sober number not to surpass for your development. If you want to hit 150 DUA with this, you will need to go to at least 8 stories to secure adequately sized multi-bedroom units.  That's what 150 DUA looks like at a bare minimum with underground parking.  If we elect to squeeze 150 DUA into 6 stories instead, we are going to be building too many one bedroom units - exactly what we shouldn't be building, according to Jacobs, if we want to promote diversity! To use her terms, that would "standardize" your development to stamp out diversity.

In other words, the six stories Ed Glaeser allotted to Jacobsian urbanism is actually exactly what will undermine it by squeezing it from the other side: it will either not create enough density or not enough diverse housing with density. He would be making his point much more pungently if he enlisted Jane Jacobs as an ally in his argument for going taller.

Part of adding diversity is building affordably, and for that you also need construction efficiencies that make it worthwhile for developers. Because the price of steel is so high compared to wood-frame construction (which can't get higher than 6 stories), developers don't like to use it in that vaunted luxury mid-range of 7-12 stories, unless they are building in a market that actually can support that product. I would argue that, in fact, we have to climb higher, up to 170 DUA at least, in order to get enough supportable high-rises that can add affordable family unit products to a district. We need to escape the middle!

Moreover, this makes good sense for architectural reasons. The mixed-use buildings in the 4-6 level range are needed to provide "relief" for daylighting their taller brethren. That mixed typology in a district to me seems what we should be extolling as "neo-Jacobian urbanists" (the Vancouver strategy). By easing regulatory pressures to going higher, urbanist development is able to become more affordable again to the middle class, and I can only see Jacobs applauding Glaeser here. Where she would disagree is that we can settle on one solution to suit every frame; in fact, the mixtures and exceptions are important. Sometimes, regulation promotes. As an architect who has to think about things like daylight and the needs of humans and sheer construction realities, i.e. "regulations" of a sort, I have to add that the physical mixture of diverse architectural products, short and tall, side by side, can secure multiple benefits.

In short, don't trust Ed Glaeser when he talks about architecture. As Adam Christian states, "Glaeser conceives of cities first and foremost as consisting of people and connections, and secondarily of places and buildings." Indeed. (Only the cool imagination deduces six-story walk-ups for one hundred fifty 1600 sq.ft. apartments in an acre!) But, urbanists, we gotta take Ed's advice just the same, for his and Jane's reasons, ...and go high. Very high.
Posted by Eric Orozco at 9:28 PM