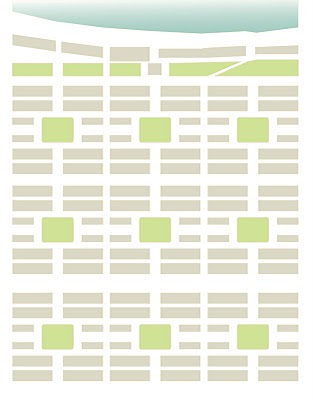 I am periodically re-enchanted by the charms of Savannah's fabric. Part of the appreciation I have for Savannah's Historic District to me is no doubt the love I have for anything manifesting an "esprit de systeme". For this reason, I can stand for hours in front of the panels of Ghiberti's Baptistery door in Florence...literally, and contemplate for days the thematic order of Giotto's campanile medallions, composing dissertations of order in my head. I think I have a medieval brain. (Which in my book is a good thing).

These things (I apologize ahead of time to my readers) do not bore me. I was a student philology at one point in time for a reason. I have been and still remain, as far as I'm aware, the only student of New Testament era texts to see that the composition of Johannine books remains fixated on the structures of the creation narrative in Genesis. Rigorously. Playing with the order of chronology, but with rules of adaptation not unlike jazz. To this day it startles me that contemporary scholars do not notice these things..., but I'm a medieval-brained thinker, and the deep point of philological inquiry, as Gershom Scholem usefully pointed out once, is to dispense with the illusion that we can truly understand our ancient subjects. ...But I digress.

Savannah's rigorously patterned urban fabric creates many rare opportunities to see what would work in cities when a greater order is allowed to exist. Savannah's deep order actually does exist in less structured city fabrics (or is it more correctly, more structured fabrics,...more imposed or restrained?). But in Savannah, the order of traffic form comes to the surface. It becomes legible. More compact. More synapsed.

If one walked with horse's blinders, one could walk across the entire Historic District in ten-twelve minutes, but probably no one ever realizes this (much as no one ever notices the creation template in the murky depths of the most popularly read New Testament book, due to all the distracting surface sights). So enchanting is Savannah that it steals your notions of time. It is larger than itself, and there is something to be said about that. For that reason alone, Savannah is worth contemplating. I will begin sharing some of its beautiful order. This beauty is manifest in the traffic pattern (diagram below), which is a dissertation in system logic. Deep rules to a city's traffic circulation do exist, and have application even in amorphous, non-rigidly patterned fabrics. What Savannah can teach urban designers is very useful indeed, but orders need named elements. They need taxonomic categories, and thus a humble "odonomy" awaits our sensitive patience to name and to prod.

...Before I get to that (which might be a little while yet), I would welcome any observations you might have. As always, better insights are gleaned by listening first to others. In the diagram below, I depict the one way streets in purple, the 2-way streets in teal. The size of the arrow roughly indicates the intensity (in volume, speed and priority) of vehicular flow. The block and right of way widths are exact to reality, although I made the blocks more uniform for clarity's sake. What is depicted here is the ideal platonic traffic flow of the city...It's normative, not its actual (exceptions, as in all systems, abound).

So ...any observations about the pattern below that you think are worth mentioning? 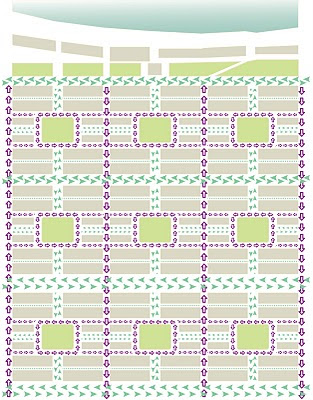 I like how the parks function as large roundabouts and also how traditional two-way streets are on axis with the center of the park.

Despite living in the South, I've never been to Savannah. I hope to son!

You're right that John is dripping with Creation motifs. That's so amazing because, unlike many of the other gospels, he is interested in stepping back from the historical flow of things to see the ultimate roots.

Colin Gunton's Triune Creator is a wonderful study that focuses mainly on John.